Frig Off Get Fit

With five episodes now available online, Frig Off Get Fit is staking out new territory in the local entertainment scene. The web-series is about getting out and being active in Nova Scotia. It focuses on what makes our province beautiful and unique.

Frig Off Get Fit is the brainchild of Rosemary Curry and Corinne Dunphy. Curry and Dunphy are cultural creatives who make their homes in Antigonish. Curry, with her natural grace and good humor, plays the role of the series’ host in front of the camera. Dunphy, with her talented filmmaking chops honed during an MFA at Ryerson, shoots and edits the episodes.

Neither Curry nor Dunphy is a traditional jock, but both are Maritimers through and through. Their series aims to promote a healthy lifestyle in a cheeky way that pokes a bit of fun at our current gym-obsessed media. The series also celebrates Maritime culture. We hear local accents throughout the episodes and see familiar landscapes. We also see our host take on sometimes uncomfortable outdoor challenges, like harvesting Christmas trees or jumping in the ocean during a New Years Polar Bear Dip. It’s all for the sake of exploring the beauty of Nova Scotia while burning calories and strengthening muscles.

The pair launched their first video last November. It was one of three episodes they did about the Windsor Pumpkin Regatta. Then in December, Frig Off Get Fit received a micro grant from Awesome Antigonish. I had the pleasure of being one of the dozen Awesome Antigonish trustees that deemed the project awesome. The Frig Off Get Fit team has since begun selling synthetic exercise shirts with a logo by local artist Noella Murphy. They’ve also been active using social media to share pictures of snowshoeing and other fun winter stuff in the province.

Look for Frig Off Get Fit on Facebook and Twitter. You’ll certainly get a smile, and you may get inspired to get out and get active yourself. You might even feel your body thank you. As Curry and Dunphy say, “It’s a movement.” 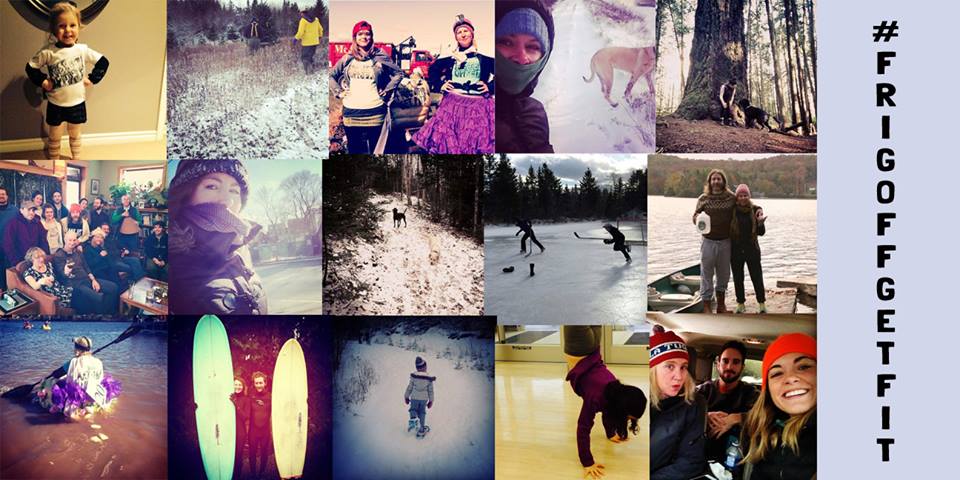