Our communities are dying. Some have no doctors. Others, empty store fronts. The schools seat a fraction of the number of students they did a decade ago. Many adults leave the province as soon as they’re able, at eighteen or twenty-two. Nova Scotia is not a vibrant place—someone has to say it. In the words of Danny Graham, “Those who like it, like it a lot. Those who don’t are our young people.”

The oneNS Commission Report, also known as the Ivany Report, gives a sobering account of how bad things are. No other comparable area in the world has gone through the kind of demographic shift we’re facing and survived.

Eleven communities around the province met on June 16th to discuss the results of the Report. The theme of the day, which was hosted by Engage Nova Scotia, was “Stepping Up”. Danny Graham and Ray Ivany gave the main talks via a live stream from the Central Halifax Library. Graham and Ivany urged over a thousand people watching to accept the magnitude of our demographic issues. They stressed the need to take big steps. “When confronted with a 10 foot chasm,” said Ivany, “two 5 foot steps won’t do.”

In Antigonish, where I attended, Rose Murphy, Lisa Apfeld, Liz Brennan and Dave Risk gave presentations about four exciting initiatives. The Townhouse, Our Food Store, Arts Health Antigonish (AHA!) and FluxLab were celebrated as examples of innovations that help our community thrive. The Antigonish group was organized by Philip Girvan from the Community Sector Council of Nova Scotia along with Pauline MacIntosh and Phil Davison from the StFX Extension Department.

I asked the local organizers for their impressions of the Antigonish sessions. There were over forty people at Dennis Hall for the day. Girvan, MacIntosh and Davison were happy to see people come out to discuss the development of the town and county. “People have had a chance to come together and to hear stories of inspiration, of hope, of positive discourse,” said Davison.

But a well executed conference and a handful of successful organizations should not overshadow the call for everyone concerned with the future of Nova Scotia to step up. The Ivany Report is not just asking us to rally around local success stories. The Report shows that we need something more fundamental than a rally. We need a whole new narrative about what it means to be Nova Scotian.

We must become a new people. 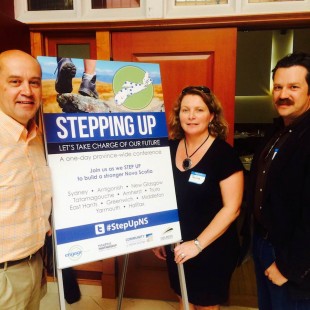 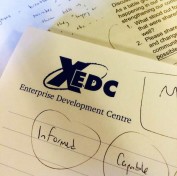 Stepping Up in Antigonish 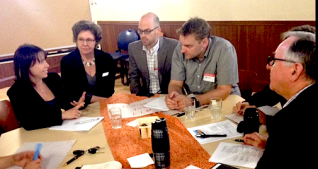 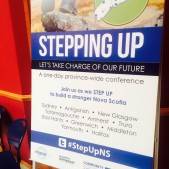