Where else do you get rhubarb juice at a literary reading?

Over 100 people cozied up at the Coady Tompkins Memorial Library in Margaree Forks for the 6th Annual Margaree Canada Day Literary Celebration. One of the organizers opened the doors for air. A highland breeze circulated through the crowd as Dawn Beaton began the event with a slow fiddle march.

Beaton worked up her march into a lively reel. Audience members kept time with their feet. Then Mary Lynk of CBC Talk Radio stepped to the podium to emcee.

Rebecca Silver Slayter and Johanna Skibsrud read during the first half. Silver Slayter read the emotional opening of her first novel, In the Land of Birdfishes (Harper Collins). Skibsrud read an excerpt from her second novel, Quartet for the End of Time (Hamish Hamilton), as well as a poem composed in honour of her daughter’s birthday—July 1st.

Beaton played another tune during the intermission. Lisa Moore and Linden MacIntyre read during the second half. Moore reflected on the theme of government surveillance before reading a scene from her third novel, Caught (House of Anasi Press). MacIntyre reflected on a different kind of surveillance—the kind that happens in small towns—and read from his fourth novel, Punishment (Random House).

MacIntyre gave a nod to Beaton when he came up to the end of his reading. Beaton played a celtic lament as MacIntyre described two old folks, who were once teenage lovers, falling back in love.

Afterwards, everyone enjoyed chocolate cake and rhubarb juice on the lawn.

The Margaree Canada Day Literary Celebration honours the talent and heart that comes from Inverness County. It’s also a fundraiser for the local library. Thanks to ongoing support from the Coady family, this annual reading continues highlight the importance of the arts and education in Cape Breton. 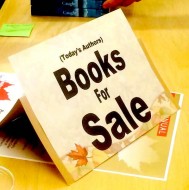 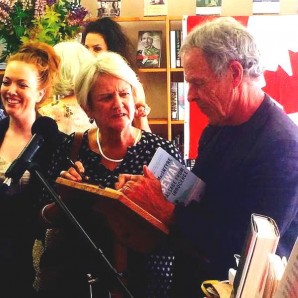 A fiddler, a reader, an author

What was left of the cake