Richard Fulton set up shop in the Baddeck office this spring. He’d heard about the AA Munro culture from his dad Steve, who is part of the TeAAM in Truro. So he studied to get his license and then moved his young family from where they were living in Halifax to their new home in Cape Breton.

In addition to a new career and a new town, Richard is also excited about having access to the great outdoors on the Island. He’s been enjoying the mountain biking trails and the water.

Before he became a broker, Richard sold cars. “With cars it’s a lot more emotional than insurance,” he told me. “A great example is a convertible. If someone’s thinking about a convertible, you can take them out with the top down on Spring Garden Road on a sunny day and the thing sells itself. People get excited about a car. They can touch it; they can see it. Insurance involves a lot more trust. The customer can’t feel what they’re buying. They really have to trust the brokerage and trust you.”

But in both car sales and insurance, you need a way to keep good notes about what your customers are looking for. At his former job, Richard didn’t have access to the dealership’s business management system, so he built his own with spreadsheets and notifications on his smartphone. When Richard came to AA Munro, he had to learn TAM. Then, a couple of months later, he had to learn SIG. I thought it would be neat to hear a brand new user’s perspective on the two systems.

“It’s clear right away,” he told me. “You can just tell from how the two systems are laid out. Like with a change request—it takes something like eight steps on TAM, but on SIG, click click click and you’re done. There’s going to be a learning curve for people who are used to TAM, but I really think SIG is going to be great for productivity. And for people like me who are new, it’ll be quicker to train. ”

One of the features that Richard likes on SIG is how you can have multiple windows open at once. “I don’t work in a linear fashion,” he said. “A call comes in, somebody walks in the office, I have an e-mail on the go. By the end of the day it all gets done, just not in a linear fashion. I think of it as controlled chaos.”

Despite its long term advantages, SIG itself has introduced some chaos into our work environment. At the moment it’s unfamiliar and can be frustrating. Remembering that change is always tough will help us keep the chaos in control. 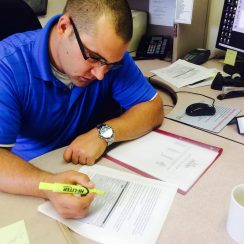 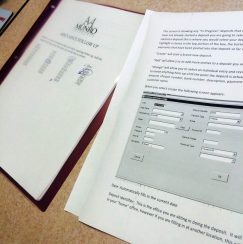