Green Takes the Gold in Lochaber

Emily “Pig” Piggott is known for her quick starts. Wayne “The Hulk” Ezekiel, for his enthusiasm and determination. At the AAM Financial Golden Oar Challenge, Emily and Wayne raced together as “Tidal Wayne”. They came off the starting line first and established an early lead. They were racing in a boat that Emily’s dad raced in thirty years ago.

Another pair of strong contenders for the Golden Oar was Matt Cormier and Steve Lane. Matt rows at the national level and doesn’t like to lose. Steve is a life-long athlete. They raced as “Fast Lane” in yellow.

Warren Laybolt and I were the heaviest pair of rowers on the water. Our strategy was a low stroke rate focusing on technique and power. We raced as “The A Team” in orange in the freshly christened “Liquid Asset”, which was donated to the club by AAM Financial. Vickie Young in our Glace Bay office suggested the name of the new boat.

In the second half of the race, Matt and Steve fought hard to take the lead from Emily and Wayne. Their grit was shining through. The two boats were almost neck and neck. Then Steve unfortunately “caught a crab”.

To catch a crab in rowing means to put your oar in the water at the wrong time and create turbulence that throws off the balance and timing of the boat.

Matt and Steve struggled to regain their rhythm together. That’s when Warren and I started to pick up speed. Our low and powerful stroke rate was paying dividends. We came on like a freight train. We passed Matt and Steve and began closing the gap on Emily and Wayne.

Liquid Asset gives off a beautiful hum on the water when the rowers inside her are in sync.

But Emily and Wayne dug in. They kept their cool and kept pushing. Before Warren and I could catch up, they sailed past the finish line—the clear winners. Emily and Wayne took the Golden Oar in the AAM Financial Golden Oar Challenge.

This is Emily’s second time as a TeAAM winner. In 2012 she won the Nova Scotia Female Midget Hockey League Student-Athlete Scholarship, which is sponsored by AA Munro. 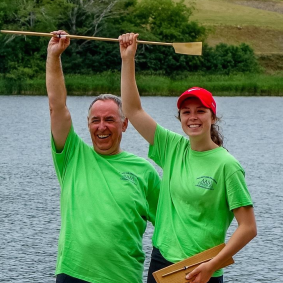 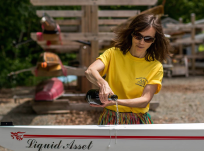 A Great Day for Rowing on Lochaber