My order was missing. I spelled out my name a fourth time. The sales rep punched each letter of the alphabet into his keyboard. “Well, it’s not in the system,” he said, letting his fists fall on the counter like gavels. He looked up from his computer screen towards the door. I was excited for my new shirt, so I told him I could wait while he searched. He glared, asked for my phone number, then started muddling further through the store’s records. Finally, ten minutes later, the manager came over to help him. I got my shirt, but I left dreading the thought of ever buying anything at that store again.

Knowing how to use your tools is so important. We’re investing a lot of energy in training on our new system, SigXP, because our familiarity with it will directly affect how our customers feel. To date, Tracey and Val have completed the first phase of training with multiple 2-day seminars over eight weeks in Sydney, Antigonish and Lower Sackville. Armed with handouts, a projector, PowerPoints and a dozen laptops loaded with new software, they’ve been working hard to get everyone up to speed before we go live with SigXP this summer.

It was a sunny Monday morning in May when I showed up to see how the training was going off-site at the Hawthorne Room in Antigonish. Madonna, Meghan, Jess, Harley, Faith, Terry, Sharon and Wayne were learning how to search the database. Tracey and Val issued the group a challenge: “How many customers do we have named ‘MacDonald’?” Wayne and Meghan began an animated father-daughter competition to see who could find the answer first as Terry and Sharon sat quietly across the table from them, already finished. Meanwhile, Harley was musing aloud that he had an answer quite different from what others were reporting. Val leaned over his shoulder and pointed out that he’d spelled “MacDonald” incorrectly. His musing stopped, until the next challenge of course!

Tracey and Val told me that similar questions about how to use SigXP came up during each seminar. Every new user goes through a learning curve. “However,” said Tracey, “we did also get unique questions that will help with the development of workflows.”

Val agreed. “During each session we got some really good feedback as to how we could enhance the system,” she said.

In the short term, learning a new system takes a lot of energy from the training TeAAM and from everyone in every office. There will be on-going webinars and follow-ups. Scheduling is a challenge, especially since we can’t shut things down while we learn—there are customers waiting everyday.

But in the medium to long term, SigXP promises to give us more time. One of its biggest advantages is that it reduces duplicate entry. It also allows us to keep more detailed files. And the internal search engine is fast and easy to use. With the proper training, SigXP will help us develop stronger relationships with customers. It promises to help make our conversations with people a delight. 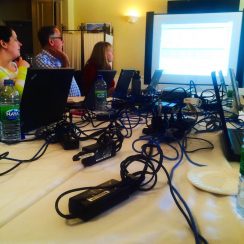 Tracey and Val after a seminar