“Who knows where I would be if I didn’t have hockey when I was fourteen and fifteen?” Chris Dunlap told me when I caught up with him at the Keating Center in December. “Hockey provided structure and discipline for me when I was growing up. I was coached by some great individuals who have taught me a lot about life not just hockey.”

Chris met with me to talk about the Learn to Play Program. Chris is a leading figure in the program along with volunteers from the X-Men and X-Women hockey teams and the local RCMP. They’re teaching kids from Paq’tnkek the fundamentals of hockey. The program kicked off in October with a BBQ & Ball Hockey game. Participants were then sized for equipment. They’ve had five sessions on the ice so far and have five more sessions planned for the new year. “They’ve come a long way in a short period of time,” said Chris. “They started not really knowing how to skate.”

The idea for the Learn to Play began almost two years ago with members of Antigonish Minor Hockey Board. The Board was brainstorming ways to encourage groups that have barriers to entry for playing hockey. This year the program is focused on children from Paq’tnkek. Next year it could be another group. The board wants to see the program continue to grow and serve different communities, individuals and groups. A program like this can have a life-long impact.

Learn to Play was able to get off the ground when Craig MacDonald and Dennis Bonvie, two former NHL’ers, applied through their Rinks to Links Foundation for a grant from the NHLPA’s Goals and Dreams Foundation.  “I’m not sure where the program would be today without the support of Craig MacDonald and Dennis Bonvie,” Chris told me. “They’re great role models. We are very lucky to have them part as part of the greater Antigonish Community.”

Rinks to Links received $15,000, which was used to purchase equipment. Once the equipment was available, Antigonish Minor Hockey put together funds for the ice time and organized volunteers. A group of volunteers from the community met regularly and put a tremendous amount of time and effort into planning the program. Chris has been a member of the board for the past three years and finds that coaching is a way to give back. He was happy to be get involved. And it looks like the kids are having fun too. 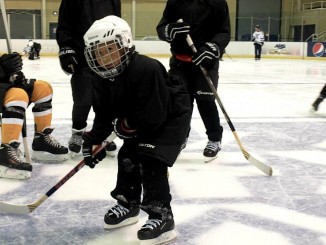 Stick on the ice. 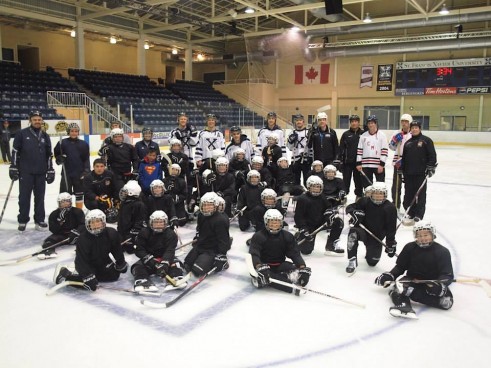 Group shot – Chris is on the far right.