Understanding the Price of Insurance

Why does the price of insurance vary? How come you can sometimes find different quotes for the same car or home? The main reason is that insurance is based on different ways of measuring risk.

Let’s look at an example.

Say we have 100 people who need car insurance. Let’s say they’re all the same age and gender and none of them have ever had any previous claims. Let’s also say that an insurance company, we’ll call it Company Able, decides (based on their historical data) that around 5% of people like this will have a claim in a year with an average claim cost of $10,000. 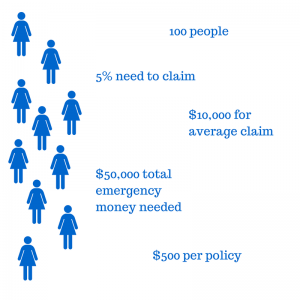 An insurance company also has overhead costs (like buildings, salaries, marketing, claims adjusting, etc.). And brokerages that sell companies’ policies have separate overhead costs of their own. Because the marketplace is competitive, nobody can artificially inflate prices (there are no patents involved with insurance policies).

So let’s say the insurance company’s overhead is expressed as a percentage of the projected claims payout. You might think of this as the administrative cost of organizing and facilitating a certain amount of predicted emergency money available to a group of people over a year. Let’s say this fee is 10%. The price of insurance becomes $500 plus $50. The broker’s overhead is similar, so let’s say they get a 10% commission as well. On $550, that’s $55. This means that an insurance policy from Company Able costs $605 from any broker. 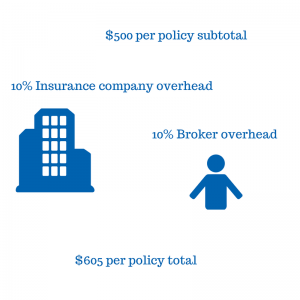 While Company Able predicts that they are going to pay out $50,000 in a year in claims, perhaps another company, let’s call it Company Best, has more or different data on people of the same age and gender. Let’s say that they predict 6% of people like this are going to have a claim in a year with an average claim cost of $11,000.

That doesn’t seem too different from Company Able’s prediction, but when you add up the numbers, it means that Company Best predicts that they are going to pay out $72,000 in claims for the year. This means that they have to set their base price of insurance at $660, which, after the same sets of commissions for the insurance company and the broker means that Company Best’s policy costs around $800. That’s almost $200 more than Company Able.

Both the person buying and the coverage may be exactly the same, but the price varies because the two companies have a different assessment of the risk. 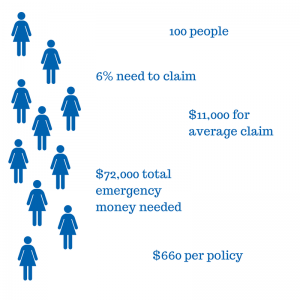 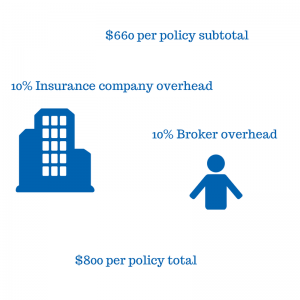 Not every broker represents every insurance company. Business relationships develop over time and sometimes particular things in any given industry are only available from certain people, for example, as in the case where there’s a patent.

In insurance it has nothing to do with patents, but a lot to do with trust and what a brokerage is set up to do. For example, if a brokerage knows a local area very well because they have people living there, the loss ratio they develop over time (based on the number of claims made within the policies they sell) might be better than a brokerage without local knowledge. This might mean that an insurance company will give them access to different kinds of coverage. Being community-based is a big part of our model at our brokerage.

And sometimes insurance companies offer policies at prices that they know will lose money initially. They plan to raise premiums over time. This scenario is like a loss leader—except that the loss leader and the product it leads to are the same, because once you have an insurance policy that you trust, you’ll probably keep it, even if the premium is raised a little.

But what’s perhaps more common is how risk assessment varies in person with different brokers.

Remember, each insurance company sets their base price of insurance at some number. Then the companies provide all sorts of discounts and exceptions that a broker has to assess in person. This is where the expertise of a broker is important. At our brokerage, we spend a lot of time on training. The Insurance Brokers Association of Nova Scotia is a also good place to find a skilled broker. A broker has to know about the discounts and exceptions that are available on the price in order to offer them to the customer. The broker also has to take the time to ask the right questions of the client. 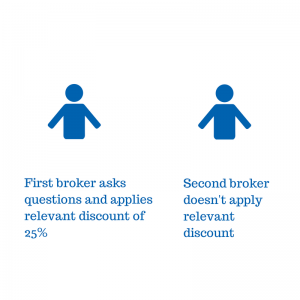 This explanation of where the price of insurance comes from may have seemed long and drawn out, but it’s actually a very simplified account.

In our example the price only ranges a few dollars, but the percentages and agreements between insurance companies and brokers can be much more complicated and the prices can vary a lot more.