Ringette is a family affair at the Gilbert house. Daughters Lindsay and Darby play at the competitive level. Dad Peter is a coach. And mom Karen has been a team manager and member of the local league’s Board of Directors.

This year AA Munro Insurance sponsored Lindsay. She’s been playing since six-years-old and earned a spot on Nova Central’s U16A team last fall. The team went on to win Gold at the NS Provincials, which gained them the title of Team Nova Scotia and a spot at the Eastern Canadian Ringette Championships.

The season wrapped up in April with the team winning the Silver medal at the Easterns against teams from Ontario, Quebec, Nova Scotia, New Brunswick and PEI—over 1400 players attended the tournament!

The girls hit the ice three to four times a week and had an hour of dryland training every Friday. The team also did a lot of travel. Three of their coaches play the sport and served as true role-models for the players with their commitment, work ethic and amazing positive attitudes.

Ringette is known as “The Fastest Game on Ice”. It is mostly played by females and the message of “girl power” is a common theme. Intentional body contact is not allowed. The sport requires incredible teamwork. You cannot carry the ring over the blue line: it needs to be passed to a teammate. The use of a 30 second shot clock and a “move it or lose it” rule means that speed is a defining factor in a team’s success.

The sport was invented in Ontario in the early 60s and brought to Nova Scotia in the 70s. There is a National Ringette League (the Atlantic Attack won the 2018 National Title). The game is also very popular in Finland, Sweden and the US.

We love learning about team players and asked Lindsay to share some of her thoughts on the sport.

What was the most exciting part of this season?

Winning the Provincial Gold Medal and earning the title of Team Nova Scotia to represent the province at the Eastern Canadian Ringette Championships.

What kind of dry land training do you do?

What kinds of advice have you gotten from your team’s sports psychologist and nutritionist?

What have you learned playing ringette?

Work hard and NEVER give up. You can accomplish great things if you work together as a team. 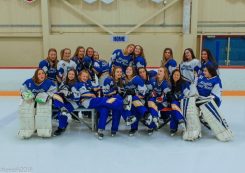 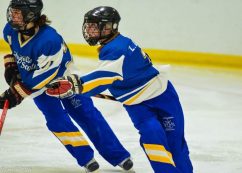 Lindsay on the Ice