The Value of a Story

Knowing how much insurance a person needs can sometimes be tough. It helps to be a good listener. “The more you get people talking,” said Tanya Roode, “the more you learn about them.”

Tanya has been with our New Glasgow team since 2016. She’s new to the industry, but comes with many years of experience listening to people’s stories.

Tanya first learned the value of a story at Walmart. As a supervisor, it was her job to try and understand whether or not an item returned without a receipt might have been stolen.

“I had to figure out who really lost their receipt or who really got something as a gift and didn’t like it. So to be able to learn about people and why they were bringing stuff back, I’d say, What’s your story?”

After Walmart, Tanya spent fifteen years as an educational assistant in schools. She worked a lot with kids with special needs, learning how to hear people’s stories even when they weren’t able to speak them aloud. It was an incredibly challenging and rewarding time.

Following major staff changes at the school board, Tanya decided she needed a change herself. She went to Alberta for a couple of years to take care of guest services at an oil camp. The job involved managing thousands of people’s needs as they flew in and out from around the world. And, as fate would have it, the job also involved being part of a crisis response team for the Fort McMurray Wildfire.

“We took in evacuees before we had to evacuate ourselves. And I was constantly backing up our data—for insurance purposes.”

Since joining AA Munro, Tanya’s been learning how someone’s story can help protect them in the right way. She’s finding that the details might lead to an extra discount, or to the proper coverage so that a claim actually gets paid out.

“I’m slowly learning it’s between the lines that counts,” she said. “You don’t make it a question, you make it a conversation.”

And Tanya’s also finding that people are happier to buy an insurance policy after they’ve had a chance to tell their story. It makes them feel like they’ve not only met a broker—they’ve also made a friend. 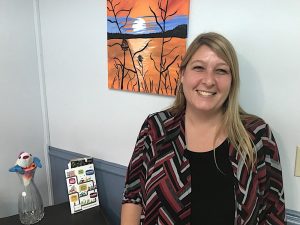