Another Boat for Antigonish

At the Golden Oar Challenge last summer, Wayne wasn’t afraid to get wet. After he and Emily won the race, they were both dipped in the lake—a tradition for winners in the StFX Rowing Club.

This kind of grassroots participation is a big part of the AA Munro culture. Wayne and I didn’t simply organize the donation of a boat. The two of us, alongside Steve Lane from AAM Financial in Truro, got on the water with students and became part of the club’s story. Wayne even dressed up in a Hulk suit. Some people might think our approach to community is a bit quirky for a company our size, but getting involved is kind of just what we do.

Another part of our culture is the broad community reach we have, both across the province and up to national suppliers. So when coach Katie Edwards asked Wayne to sponsor a second boat for the upcoming Canadian University Rowing Championships in Lochaber, Wayne reached out to Pembridge and Portage. He explained the importance of this event for our region and for various local groups.

300+ university athletes and their coaches will spend a week in Antigonish County at the end of October into November. All of the local hotels are fully booked. The student athletes from across the country will challenge their minds and muscle—and in particular, their team spirit—as they strive to cut through the water in sync. Rowing teaches people how to work together, and to respect the rhythms of nature.

Katie approached Wayne about buying a second boat because the StFX Lightweight Women’s Four team recently found itself without anything to train or race in when an agreement to use a boat from another club fell through.

Within a day, Pembridge and Portage answered the call for support. They offered to co-sponsor a boat for StFX.

The X-women racing in the boat are choosing a name right now. 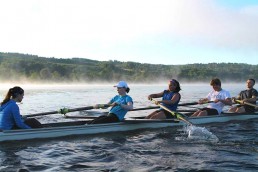 A quad+ on the water 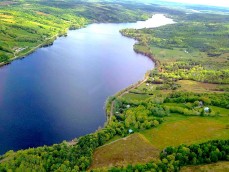