A sharply dressed crowd gathered on a warm evening at StFX’s Keating Centre this past June. Chris Dunlap checked tickets and Karen Armstrong welcomed patrons through the door. The dinner auction was the largest to date for the Bonvie-MacDonald Rinks to Links Golf Classic.

“We’re fortunate that our names are attached to the event,” said Dennis Bonvie. “It’s an honour and a privilege.”

“We have such a great committee and such a great group of volunteers and sponsors,” said Craig MacDonald. “One phone call and they’re back in and make it happen.”

Bonvie and MacDonald established the fundraising event in 2004 with the aim of giving back to those in need in the Antigonish area. The cousins played in local hockey programs before going on to skate professionally with teams in the AHL and the NHL.

This year as dinner arrived, Anna Ludlow and T. Thomason harmonized the lines to “Amazing Grace”, then invited everyone to sing along. Once we began our appetizers, the organizing committee showed video highlights with success stories and greetings from local players as well as celebrities such as Don Cherry.

Throughout the meal of steak and scallops, Ken Farrell from 989XFM ran a live auction up front with Miles Tompkins for larger items like getaway packages to hockey games in Boston, Toronto and Montreal. Tables full of silent auction items also flanked the back of the hall. I got up several times to bid on a pizza stone and a bottle of Scotch.

Money doesn’t solve everything, but it often makes a huge difference to help kids play. And in addition to fundraising, the organizing committee raises awareness for causes like sledge hockey.

Each year Bonvie-MacDonald looks for new ways to branch out. Whether through sport or support programs the committee truly wants to make a difference. And when the roots are strong, there’s a good chance the branches will grow.

Special Olympian Kristina Richard with some of our Antigonish team 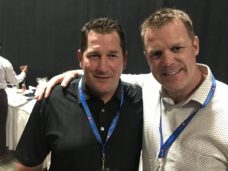 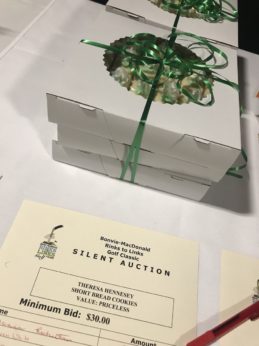 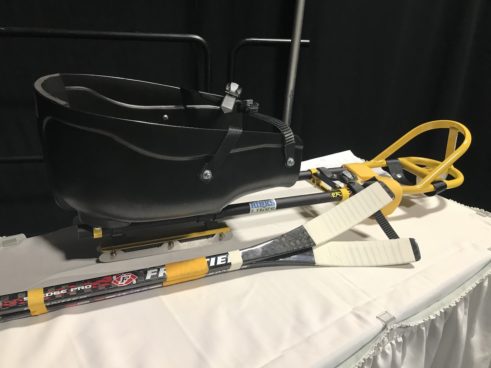