Getting Serious About Wild Salmon

Wild salmon are in a bad way. The stocks are disappearing due to a variety of factors including overfishing, residential and commercial development, and larger environmental issues like acid rain.

“Unfortunately there’s no one magic bullet to solve the problem,” says Larry Shortt, an angler and former police officer who now minds shop and swaps stories at Fishing Fever Fly & Tackle Shop on Agricola in Halifax.

The problem is global. The state of wild salmon in Nova Scotian rivers is complicated by fish migration patterns through international waters. In some places, regulations and fishing practices are much more progressive than here. In others, not so much. But regardless of what is happening elsewhere, there are things that can be done locally. For example, provincial regulations introduced this year require the use of single barbless hooks and mandatory live release while fly fishing for wild salmon and grilse. It’s a change that Larry has been in favour of for years. He sees it as a small sacrifice for recreational anglers who live for the thrill of hooking a fish and aren’t really out on the water in search of supper. As Larry says, “the tug’s the drug”.

Larry is a long time friend of Derek Flight from our Lower Sackville office. If you visit Fishing Fever, Larry is glad to give all sorts of advice. He can also show you photos of Derek and Derek’s son Tyler up on the wall in the back. The photos of Derek and Tyler are just two in a row of photos that wraps around the shop and includes hundreds of anglers. Fishing Fever is clearly a community hub.

Derek got into fly fishing when Tyler wanted to learn how to tie flies almost two decades ago. Fishing replaced golf as Derek’s favourite pass time. It introduced him to a new community. He and Tyler began traveling around the province with Tyler’s flies and exploring the local rivers.

Last year, Derek decided to get more involved with local river preservation efforts. Right around when Ballam became part of AA Munro, Derek organized to have AA Munro donate a few auction items for the Sackville Rivers Association’s Annual Dinner and Silent Auction. Walter Regan, current President of the SRA, and a number of other local residents formed the Association in 1988.

“People used to drive cars right in,” says Larry, who’s been involved along with Walter for many years. “In nineteen ninety we pulled out fifty-eight car bodies.”

The Sackville River has come a long way since then, but there is still a lot to do. Every bit of exposure to the current conditions helps. Seasonal wild salmon counts are down almost everywhere across the province from numbers like seven thousand to figures as low as ten.

When you only get ten fish through the fish counter, it’s time to do some long term thinking about the state of your rivers, regardless of what’s been tried in the past. It’s not just the commercial and recreational aspects of fishing that are at stake, but the quality of our environment as a whole and all of the social and economic interests that are tied to it. Like tourism, for example. Or young families making choices about where to raise their kids.

Getting involved with organizations like the Sackville Rivers Association is one way to ensure that our Maritime way of life adapts and grows for the next generation. 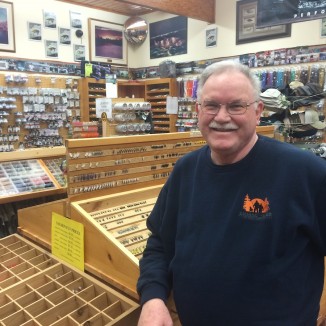 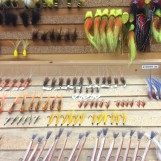 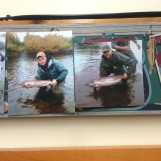 Tyler and Derek on the Wall