“Here’s where we get technical about this lobster business,” says James-Allen. He leans back at his desk with a smile. “From where I’m from, down in Digby Neck, there’s two bays. When you’re going down the Neck you got the Bay of Fundy on the right over the hill. But the water wraps around and comes up between the other side of the Neck and the French Shore. Now that little passage that comes up through there oh I don’t know, what would it be, 15 kilometres across—that’s St. Mary’s Bay.”

I know the body of water James-Allen is talking about from when I spent time in Pointe-de-l’Église at dance camp as a kid. Now I know what it’s called.

“Well lobsters come up in St. Mary’s Bay and they stay along the rocks. Those are the best tasting lobsters you can get. They’re sweet. They’re full right to the shells. And they taste all together different than a Bay of Fundy lobster or a Cape Breton lobster or, don’t say this too loud, a PEI lobster.”

We won’t tell Harley that PEI lobsters aren’t number one. Then again, Harley’s more fond of the turf than the surf anyhow.

James-Allen says that the best way to cook lobster is to steam them with only a few inches of water in the bottom of the pot. If you want to get real fancy, you can take your pot down to the beach and cook them on the shore with a bit of seaweed on top for extra flavour. Not that St. Mary’s Bay lobsters need extra flavour of course.

So how does our man in Bridgewater know so much about lobster? If you didn’t know already, James-Allen is a former fisherman. He came to insurance in a roundabout way he never predicted.

When James-Allen graduated high school, he joined on to be paid by the day working on his future brother-in-law’s boat for a year. From there he went on to fish alongside his uncle and father on his uncle’s boat for a percentage of the catch. After a few years his uncle sold the boat and license. James-Allen had a choice to make. Would he find another boat to work on or get some more education or maybe do something else entirely? When a captain or the owner of a boat retires, there’s no severance or transfer for the crew.

It seemed like a good moment to head back to school. James-Allen got an business diploma and started at a brokerage doing accounting. After a while they figured he might put his background to work selling boat coverage to the community he knew so well. From there he was hired at A.A. Munro in Bridgewater to be trained further in all sorts of markets from cars to homes to commercial buildings.

Though James-Allen thrives on the challenges of being a broker, he never pictured himself working behind a desk. On sunny days he sometimes feels he’d rather be out hauling traps along the shore with birds flying overhead or out on the water enjoying the smooth ride that you only find on a fishing boat. But he knows well that a life fishing isn’t easy and that most days are days when your body is taking a beating.

“I still have extended family members in the fishing industry,” he says, “and you know once in a while they’ll ask me do I want to go help them for a couple days, help them set, help them band. The reality is, I honestly know that I couldn’t handle it right now because I’ve been so accustomed to an office job that if I went out I would end up hurting myself.” He pats his belly and smiles again. “It’s partially my own fault too—eating too much and not getting to the gym.”

James-Allen says he loves his job and is glad he has a strong connection to his childhood community. He and his wife Krista arrive home from visits over in Digby Neck sometimes with a load of scallops that someone’s dropped off at his father’s. They stock up on lobster every year and store it all cooked up and bagged in the freezer so they can have lobster rolls or salads or chowder through the winter. And then there’s his speciality: seafood lasagna.

“It’s just like regular lasagna except you use an Alfredo sauce and put in lobster and scallops and shrimp instead of beef.”

I’m intrigued and I write down the recipe. I’m hoping that Annie will want to try it. She’s always on the hunt for new food ideas.

“You know,” James-Allen says, leaning forward with a nod, “I haven’t made a seafood lasagna in a while. I’m due to make one soon.”

James-Allen with his uncle’s boat 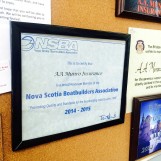 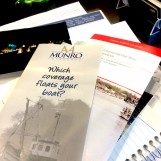 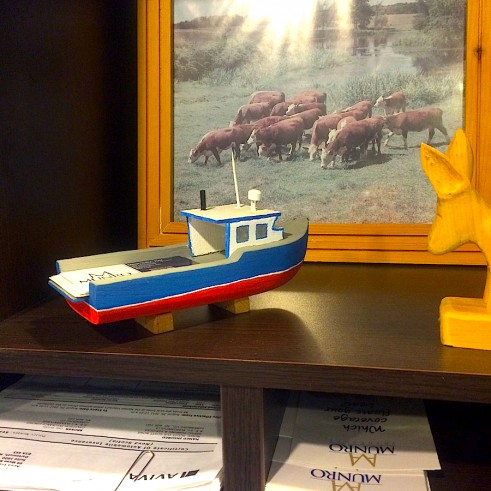