How Halifax’s Analyze Re Went Global

Startup culture continues to revolutionize the way we do business. In every sector, small groups of creative, focused individuals are rewriting what’s possible, largely through the use of technology.

Sometimes it can feel like all of this is happening far away in Toronto or Silicon Valley. But over the last few years, a team of data scientists in downtown Halifax has been quietly transforming analytics tools for the global insurance industry.

“The heart of the change that’s going through insurance is efficiency,” said Adrian Bentley, Cofounder at Analyze Re. “All of our systems and processes need to be oriented around that.”

Analyze Re works in the reinsurance space. Most people are familiar with the insurance products they buy to cover themselves for a car accident or water damage to their home. But insurance companies themselves also need to buy insurance—called reinsurance—to deal with the times when large numbers of claims come in all at once, like during the Fort McMurray wildfire. In this way, regional risks are spread and balanced against each other across the world.

“It’s kind of challenging talking to relatives and neighbours and friends about what we do,” said Bentley. “We crunch thousands, sometimes millions of data points in real-time so that folks are able to focus less on mundane, manual tasks, and can spend their time instead on analyzing the results.”

Basically, Analyze Re helps the reinsurance industry make faster and more informed decisions around how to price, manage, and optimize their portfolios.

With such a macro-level business model, most of Analyze Re’s clients are in major financial centres like London and New York. But they’re proud that their roots remain planted in Nova Scotia. The company started in Bentley’s basement, along with Oliver Baltzer and Shivam Rajdev. They took a course through Dalhousie University run by Mary Kilfoil and Ed Leach, which introduced them to the emerging tech ecosystem in Atlantic Canada.

This was around when an innovative group in Halifax was floating the idea of a local tech hub. That idea became Volta Labs. And Analyze Re became one of the first tenants.

“It was right at the start,” said Bentley, “Volta 1.0. We joined even when the building was still being constructed. Some of our team were helping with the demo of walls. We were really involved, like deeply involved from day one. And what it meant for us is that we actually had a place. That was really kind of the defining moment for us, to have a presence, an office space where we lived for the next 12 months.”

Being part of Volta allowed Analyze Re to scale up their business. They were able to bring everyone on their team together in a new way and had access to a wealth of advice. After a year they needed more space and moved out. Investment from Innovacorp and the Business Development Bank of Canada helped them grow further. They eventually were acquired by Verisk, a leading data analytics provider.

Volta has also evolved since its early days. The grand opening for their new 60,000 square foot space in the Maritime Centre at Barrington and Spring Garden is this month.

“It’s been fabulous to watch,” said Bentley. “We’re very excited to have seen it grow to the extent that it has. If we had the Volta that exists today, in terms of the space, we would have been very reluctant to leave.”

The Analyze Re team maintains links with the Volta community, offering guidance and mentorship. They visited the new space several times during construction, reflecting on how far everyone has come. I also took an afternoon to check it out myself, when most of the whiteboards in the boardrooms were still blank and the kitchen cupboards were still waiting to be filled with favourite coffees.

I later asked Bentley what advice he might give to current startups in Halifax. He told me about a blog post he read years ago at ITBusiness.ca with recommendations from Jevon MacDonald, one of the creators of Volta. The first key thing was to “get your butt on a plane.”

“I would advocate the same,” he said. He took a moment to think. “Not get on a plane, but get in front of your customer. Every successful business grows because they understand deeply the needs of the customer that they serve. Spend the majority of your time talking to your customer and then reflect back on that to build your business model from there.” 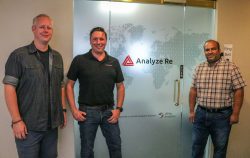 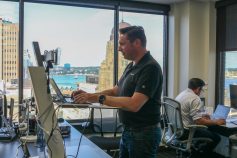