It’s not every Valentine’s Day that you dress up in a giant pencil costume on skates. This year, Zach hit the ice on February 14th as the AA Munro mascot at the Hector Arena during the Pictou Winter Carnival. His partner Hannah joined him, as did Mary from Elmsdale with her husband Gary. Tilda and Marie from New Glasgow were there, along with Tilda’s daughter Shanel. There were loads of kids, and of course the hosts and organizers of the whole event from Pictou, Georgie and Janice, were in fine form. “Anything Georgie does,” Zach said, “she always does such a great job, her and Janice.” 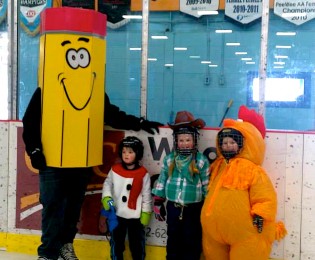 Hector and the kids 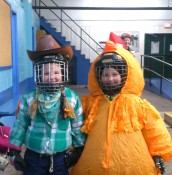 A cowgirl and a turkey

Zach got involved because he feels he owes a lot to Georgie. It was also because someone was needed who skates well. It can be a little difficult to see when you’re in a big mascot costume. You have to be steady on the ice.

There was a great turnout. The Costume Skating Party was definitely a popular event at the Carnival. The kids thought our mascot rocked—some of the younger ones were sure it was SpongeBob SquarePants. The crew gave out hot chocolate for all and prizes for the best costumes, like in the old days. Everyone had a lot of fun. Zach said he highly recommends the event. Georgie and Janice put a lot of work into it. “All you have to do it show up and skate,” he said. “Everything else is taken care of.”