It was a summer filled with World Cup fever. After an intense month of competition in Russia, the French and Croatian teams delivered a thrilling six goal finale. And with the news of a successful united hosting bid by Canada, the US and Mexico, North American soccer fans were already talking about 2026.

But alongside the intoxicating spectacle of international games, soccer is also a sport that players everywhere love for its elegant simplicity.

“You just have to have a pair of cleats and a ball,” said Maria Fraser, parent manager of the local Antigonish Celtics U10 boys team. “You should be able to run out on the field and get involved.”

Maria’s son Mark plays on the team, wearing an AA Munro jersey. Mark’s on the turf regularly. Dribbling. Shooting. Learning how to encourage his peers.

Minor soccer programs across Nova Scotia give thousands of kids a chance for fair play and skill development.

“They provide a number of different atmospheres for kids to just play, because kids develop so differently,” said Fraser.

The Celtics hold clinics, friendly scrimmages, drop-ins, practices and formal competitions. In addition to parent managers, the program draws on volunteer energy from high school students and even players from the StFX varsity clubs.

Interest in soccer is on the rise in Canada. Contrary to popular belief, more Canadian youth play soccer than hockey. And in Nova Scotia, soccer fans celebrated another piece of news this summer: the announcement of a professional club in Halifax, HFX Wanderers FC.

I got back into the sport myself the past few months at a community game on Tuesday evenings. Just like riding a bike, I found that the basics I’d established as a young player were still there. I enjoyed the return of a characteristic quick step needed to move the ball. The sense of strategic vision looking down the field. And the rush of great feelings from the exercise and camaraderie.

One evening my toddler Spencer tried to run out on the field. While kids are welcome in our Tuesday game, he’s still a bit too young. But I can’t wait to kick the ball around with him. To take in Wanderers and World Cup games together. And if he wants, sign him up for the Celtics. 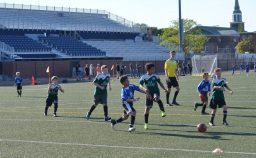 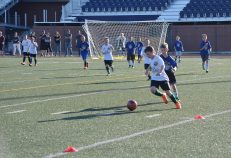 Driving to the net 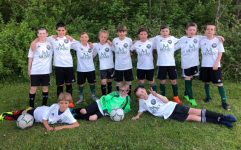 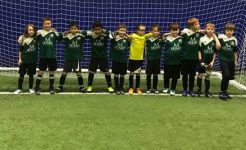