Oh man. Water damage. There’s water somewhere in a home that it’s not supposed to be and it’s ruined some stuff. Maybe major stuff. Expensive stuff. Maybe even significant parts of the house or apartment. Does insurance cover it? Is the damage covered? It’s a stressful topic, for clients and brokers alike. We all know that fire is fire, but when it comes to water damage, determining coverage can be difficult.

The first thing to remember is that water damage coverage is part of most home owners’ or tenants’ policies. We may have basic, broad or comprehensive coverage. We may have a low or a high deductible. One thing that we probably don’t have is actual flood insurance. Most people think that water damage and floods are the same thing. They’re not. Recent major floods in Calgary and Toronto have confused the issue further, because “water damage” claims were indeed paid out in those cases for damage due to floods. This was done essentially for political reasons, because the floods were severe and people were understandably upset. But most of those people didn’t actually have flood insurance. Flood insurance is very specific and usually expensive. It’s only relevant in areas that are known to flood. And, as with every other type of insurance, the predicted cost of the known risk is then spread out over a group of people through premiums. That’s what insurance is. That’s how it works. Should flood insurance be required when developers create building opportunities on floodplains? Should flood insurance be required in areas where concrete has covered all natural water run-off routes? Perhaps. Those are some good questions to ask given what happened recently in Calgary and Toronto. But today we’re just considering what’s covered as water damage under a home owner’s or tenant’s policy.

So, flood insurance and recent floods aside, what are the known water damage risks for people who own a home or rent an apartment? When we have water damage and we’re wondering what’s covered, we need to ask two questions.

1. Is the water from a man-made source?
2. Was the damage sudden and accidental?

If the answer to those two questions is yes, then we’re probably covered. That’s what we pay for in our home owner’s or tenant’s premiums. There are exceptions of course and it never hurts to reread the specific policy documents. For example, sometimes sudden and accidental water damage from a natural source is covered if it occurs along with another type of insured damage, like if a vandal breaks a window on a rainy night and there’s damage to the flooring from the rain. 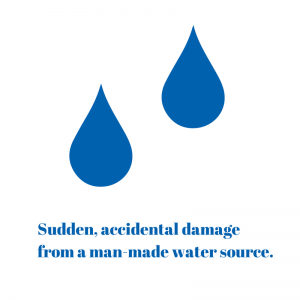 Now, one particular man-made source of water that may get into a home in a sudden and accidental way is water from the sewer system. For this, we need a sewer back up endorsement. Most home owner’s policies these days include sewer back up endorsements, but not all do necessarily, since not every home’s basement is finished and not every home needs one.

A sewer back up endorsement will have a different coverage limit than the home owner’s policy itself. These days, a lot of people are further confused about their sewer back up coverage limit dropping or the endorsement becoming more expensive. They’re wondering why. Again, insurance is all about collectively covering the predicted costs of known risks for any one member of group. These days, as a group, North Americans are putting more money into finished basements and storing things like expensive entertainment systems in them. There’s more stuff in the average basement than even ten years ago. That means the coverage is going to be capped or premiums are going to go up, because the insurance companies have more stuff to pay for when people make sewer back up claims.

To complicate matters further, climate change and aging municipal infrastructure are causing increasing numbers of sewer back up claims. Should more attention be paid to demands on municipal infrastructure that was built a generation or two ago for a very different population and environment? Perhaps. That’s another good question to consider. But when we’re looking at water damage and the cost of home owner’s or tenant’s policies, one thing to keep in mind is that when there are an increasing number of risks, that means that premiums have to go up. You probably guessed what I’m going to say next: That’s what insurance is. That’s how it works!